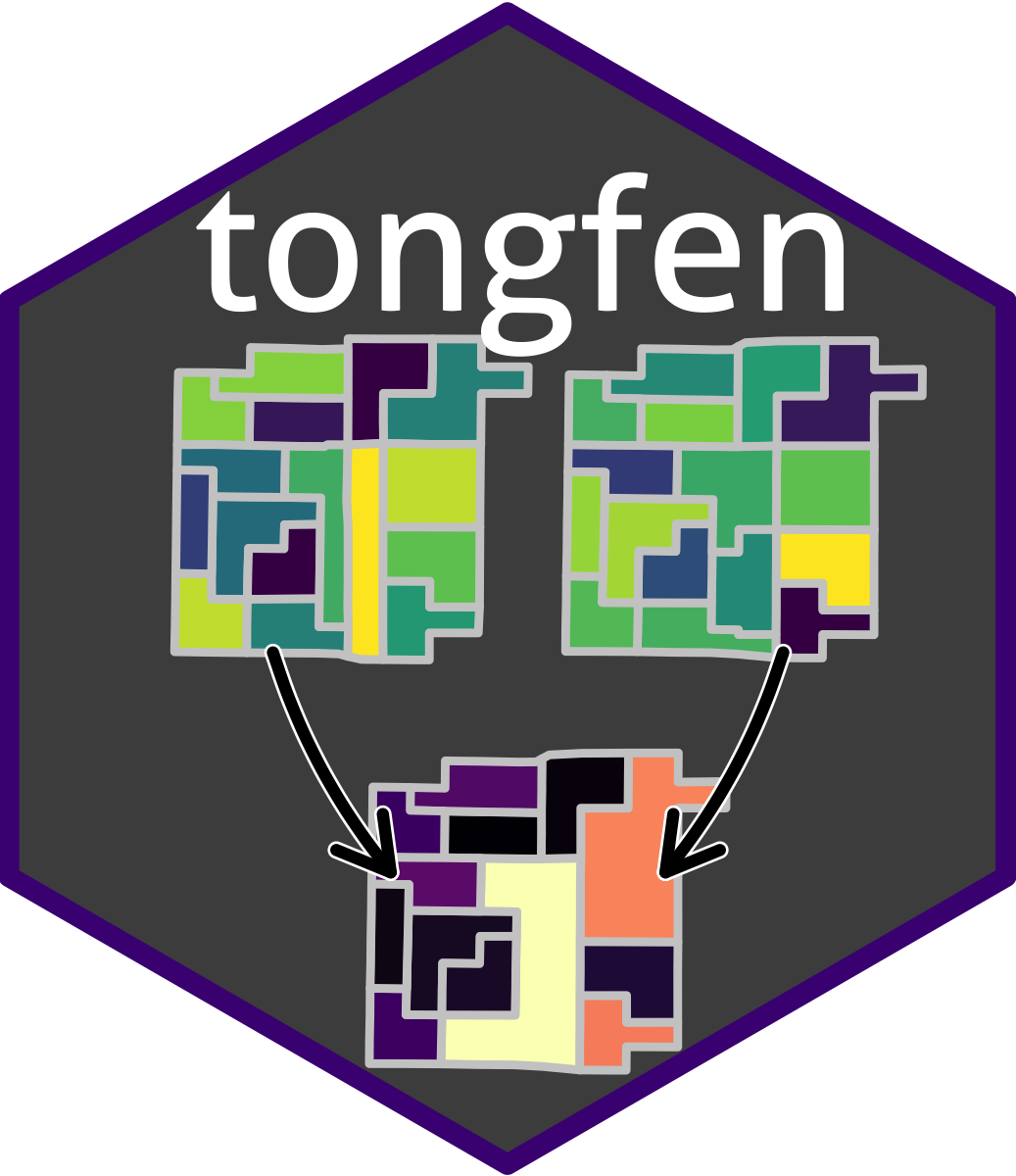 TongFen (通分) means to convert two fractions to the least common denominator, typically in preparation for further manipulation like addition or subtraction. In English, that’s a mouthful and sounds complicated. But in Chinese there is a word for this, TongFen, which makes this process appear very simple.

When working with geospatial datasets we often want to compare data that is given on different regions. For example census data and election data. Or data from two different censuses. To properly compare this data we first need to convert it to a common geography. The process to do this is quite analogous to the process of TongFen for fractions, so we appropriate this term to give it a simple name. Using the tongfen package, preparing data on disparate geographies for comparison by converting them to a common geography is as easy as typing tongfen.

The latest development version can be installed from GitHub.

The tongfen package is build around the following basic TongFen workflow:

A convenience function to validate geographic TongFen fit via area comparison is available via check_tongfen_areas, it allows to explore and deal with spatial mismatches during TongFen.

Finding a common tiling of several different yet congruent geographies is only one part of the problem TongFen addresses, aggregating up the variables is the other part. The tongfen package deals with this using a metadata table that specifies how variables should be aggregated. In it’s simplest form values are simply added up. The meta_for_additive_variables convenience function builds the metadata for additive variables. Metadata for non-additive variables like averages, ratios or percentages needs more care to build, it requires additional information on the parent variable that specifies the denominator of the average, ratio or percentage. Other data, like medians, can’t be aggregated up, although tongfen can provide estimates of medians on aggregated geographies by treating them as averages.

The need for TongFen comes up frequently with certain types of geographies. Census geographies is one such example. In some cases these data sources come with their own correspondence files that go beyond geographic matchup but also join regions to alleviate data integrity problems like geocoding issues.

In such cases it can be worthwhile to wrap data acquisition and TongFen into one convenience function, and also extend the TongFen method parameter to allow for external correspondence files to be used.

The package is well-integrated to work with Canadian census data in two essential ways. * meta_for_ca_census_vectors builds rich metadata for a given list of Canadian census variables by utilizing the metadata available via CensusMapper. In particular, this automates the proper aggregation of non-count variables like averages, ratios and percentages. * get_tongfen_ca_census wraps the process of data acquisition (via CensusMapper and the cancensus package and tongfen into one convenience function. At the same time it adds the TongFen method = "statcan" option that uses the Statistics Canada correspondence files to build the common geography. * The get_tongfen_correspondence_ca_census function breaks out the correspondence generation to aid the process of accessing the Statistics Canada correspondence files (and better integration of generating correspondences for Canadian census geographies in general) to facilitate mixing in non-census data coming on census geographies, like for example CMHC data.

The tongfen package is open to add extensions for other specialized data sources, as well as extensions of existing ones.

When geographies aren’t sufficiently congruent or the target geography is fixed, we won’t be able to use the tongfen methods to compute the data on a common geography but have to instead rely on estimates. The tongfen_estimate makes no assumption on the underlying geographies and returns estimates of the data on the target geography. It uses area-weighted interpolation to achieve this, and can be refined to dasymmetric estimates using the proportional_reaggregate function.

This method has the example that it works independent of the nature of the underlying geographies, but comes at the heavy price of only being an estimate. To be useful for research purposes we also need methods to estimate the errors this introduces and the effects this has on subsequent analysis results.

Methods to facilitate this are still under active development.

If you wish to cite tongfen: