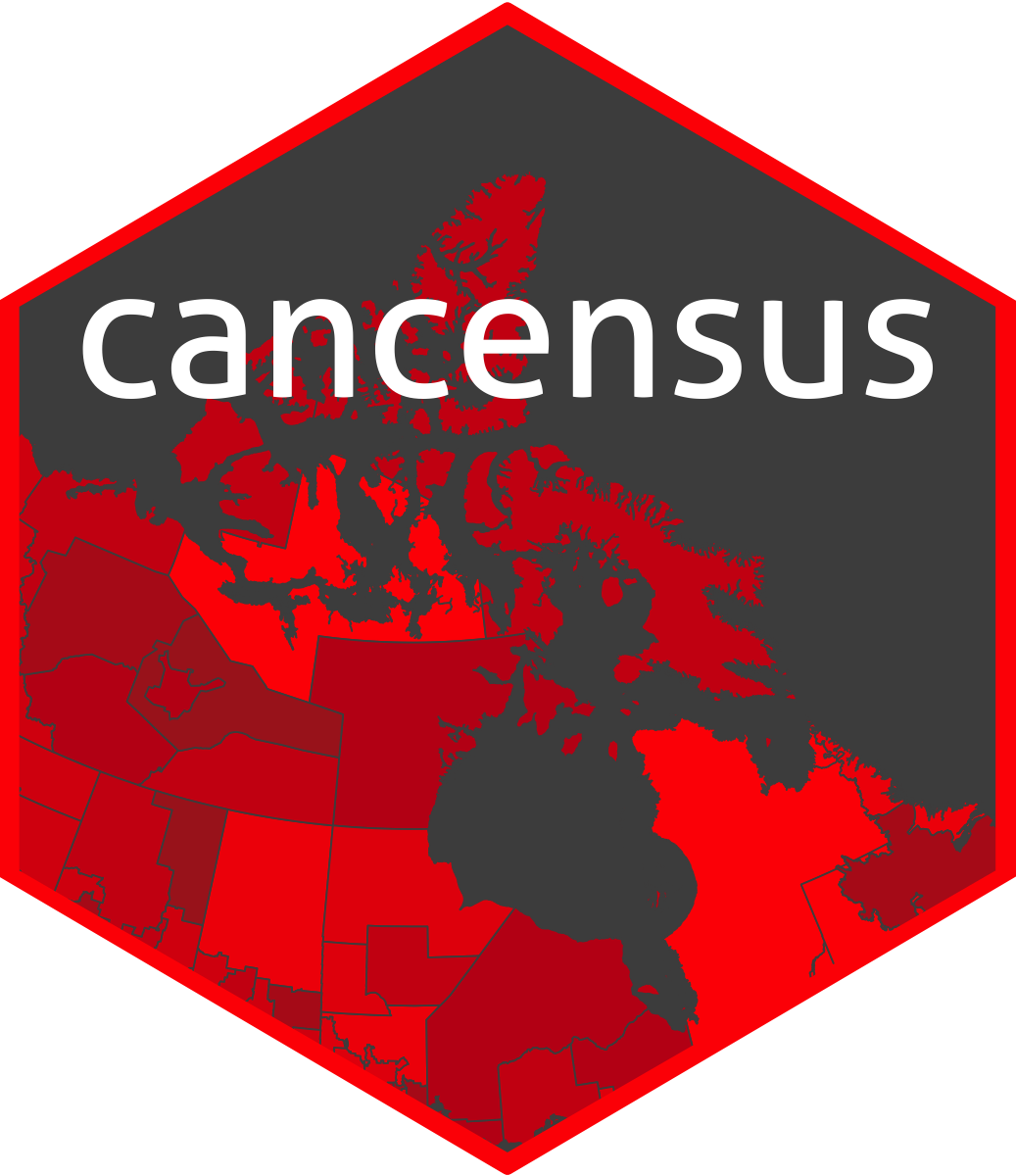 Access, retrieve, and work with Canadian Census data and geography.

Alternatively, the latest development version can be installed from Github.

cancensus requires a valid CensusMapper API key to use. You can obtain a free API key by signing up for a CensusMapper account. To check your API key, just go to “Edit Profile” (in the top-right of the CensusMapper menu bar). Once you have your key, you can store it in your system environment so it is automatically used in API calls. To do so just enter set_cancensus_api_key(<your_api_key>', install = TRUE).

CensusMapper API keys are free and public API quotas are generous; however, due to incremental costs of serving large quantities of data, there are some limits to API usage in place. For most use cases, these API limits should not be an issue. Production uses with large extracts of detailed geographies may run into API quota limits.

The new get_intersecting_geometries function has a separate API quota. This functionality puts higher demands on server resources than other API calls and therefore comes from a different bucket. By default user keys are capped to 500 region identifiers a day or 5000 per month. This should suffice for most casual use cases, but we will continue to monitor the impact on server load and may increase the default limits in the future.

For larger quotas, please get in touch with Jens directly.

For performance reasons, and to avoid unnecessarily drawing down API quotas, cancensus caches data queries under the hood. By default, cancensus caches in R’s temporary directory, but this cache is not persistent across sessions. In order to speed up performance, reduce quota usage, and reduce the need for unnecessary network calls, we recommend assigning a persistent local cache using set_cancensus_cache_path(<local cache path>, install = TRUE), this enables more efficient loading and reuse of downloaded data. Users will be prompted with a suggestion to change their default cache location when making API calls if one has not been set yet.

Starting with version 0.5.2 cancensus will automatically check if for data that has been recalled by Statistics Canada and is stored in the local cache via the new data recall API implemented in CensusMapper. Statistics Canada occasionally detects and corrects errors in their census data releases, and cancensus will download a list of recalled data at the first invocation of get_census() in each session and emit a warning if it detected locally cached data that has been recalled. Removal of the cached recalled data has to be done explicitly by the user via the remove_recalled_chached_data() function. If data was cached with cancensus versions prior to version 0.5.0 there is insufficient metadata to determine all instances of recalled cached data, but the package will check every time cached data is loaded and can identify recalled data at this point at the latest and issues a warning if recalled data is loaded.

cancensus can access Statistics Canada Census data for Census years 1996, 2001, 2006, 2011, 2016, and 2021. You can run list_census_datasets to check what datasets are currently available for access through the CensusMapper API. Additional data for the 2021 Census will be included in Censusmapper within a day or two after public release by Statistics Canada. Statistics Canada maintains a release schedule for the Census 2021 Program which can be viewed on their website.

Thanks to contributions by the Canada Mortgage and Housing Corporation (CMHC), cancensus now includes additional Census-linked datasets as open-data releases. These include annual taxfiler data at the census tract level for tax years 2000 through 2018, which includes data on incomes and demographics, as well as specialized crosstabs for Structural type of dwelling by Document type, which details occupancy status for residences. These crosstabs are available for the 2001, 2006, 2011, 2016, and 2021 Census years at all levels starting with census tract.

cancensus can return census data with or without associated Census geographical information that can be used for mapping and GIS. By default, cancensus returns tidy tabular data only, but has options to return spatial data objects in either sf or sp formats.

cancensus attempts to minimize bandwidth usage and download time by caching downloads. When attempting to download data that has previously been downloaded, cancensus will instead access the locally cached equivalent.

We’d love to feature examples of work or projects that use cancensus.

This package is designed to play well with other Canadian data packages, in particular

Taken together these packages offer a seamless view into important Canadian data.

There are several other jurisdiction where census data is available via R packages, including

If you wish to cite cancensus:

The cancensus package is designed for working with Canadian Census data. In addition to Census data, Statistics Canada provides access to a vast socio-economic data repository with thousands of data tables available for public access.

Data downloaded through the cansim package that comes with standard geographic attributes will typically share a common geographic ID that can be matched to Census data.

The tongfen package automates the task of obtaining census variables from different census years on a common geography. It is available on Github.